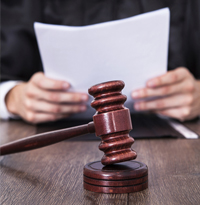 If a person is in debt due to car loans, home loans, or even credit cards, the creditor owed may be able to secure a court order and garnish the debtor’s wages in order to ensure that the debt is paid in full. This measure is usually taken to make sure that no further debts are obtained by the debtor before the initial debts are paid.

Federal law places restrictions on how much of a person’s wages can be garnished by creditors. In addition to the federal laws, states can choose to restrict those amounts even further. Generally, if there is more than one garnishment being taken from a debtor’s paycheck, the total amount garnished by all creditors cannot exceed twenty-five percent of the person’s total paycheck.

There are certain situations where a court order is not necessary to garnish wages. These circumstances include defaulted college loans, unpaid federal income taxes, and unpaid child support debt. A debtor may be exempt from having their wages garnished if they make less than the average minimum wage amount for thirty hours worked in a week. Also, if a debtor qualifies as Head of Household, they may be exempt as well. It may also be possible to discharge the debt by negotiating with the creditor outside of court.

An employer may not terminate a person’s employment simply because they have a garnishment against their wages. However, in Florida, employers are permitted to charge the employee a fee for cooperating with the requirements of the wage garnishment.

Contact Candamo Law today for a free consultation regarding your specific situation. START MY FREE CONSULTATION

This web site is designed for general information only. The information presented at this site should not be construed to be formal legal advice nor the formation of a lawyer / client relationship.